All you need to know about Polymorphic Viruses

Polymorphic viruses have over the years been one of the most difficult and complex viruses to detect. Anti-virus manufacturing companies have had to spend days and months trying to create detection routines required to track a single polymorphic. 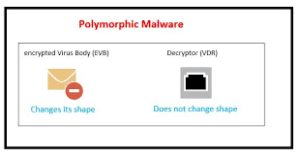 I’ll attempt to discuss about polymorphics and some of the detection mechanisms existing and also introducing Symantec’s striker Technology, a patent-pending mechanism for detection of polymorphics.

The Norton anti-virus 2.0 was the maiden version to include a striker for possible detection of polymorphics.

The Evolution of Polymorphic viruses

A computer virus can be defined as a self-replicating computer program that functions without the permission of the user. In order to spread, it attaches a copy of itself to some part of the program such as a word processor or a spreadsheet. A virus can also attack boot records and master boot records that contain all the information that a computer needs to startup.

Some viruses can replicate themselves, some may display messages input by its creator, some can be designed to deliver a part of a payload to corrupt programs, delete files, reformat a hard-disk drive, shutdown or crash a corporate network. I will quickly discuss about some viruses before we can relate it to polymorphic viruses.

All a simple virus does is to replicate itself such that if a user launches the program, the virus gains control of the computer and attaches a copy of itself to other program files. After it spreads successfully, the virus transfers control back to the host program, which functions normally. You can perform a simple anti-virus scan to detect this kind of infections.

The mode of operation of the encrypted virus was via signatures. Its idea was to hide the fixed signatures by scrambling the virus therefore making it unrecognizable by the virus scanner.

The polymorphic virus is built in such a way that it has a scrambled virus body and a decryption routine that first gains control and then decrypts the virus’ body. However, it possesses a third component which is a mutation engine that sort of generates randomized decryption routines which change each time the virus infects a new program.

So, we can see that not only is the virus’ body encrypted, but the decryption routine varies from infection to infection. This therefore confounds a virus scanner searching for the tell-tale sequence of bytes that identifies

Anti-virus researchers launched an attempt to fight back by developing special detection routines crafted to detect and catch each and every polymorphic virus. Special programs were written by line for line which were designed to detect various sequences of computer codes known to be used by all the mutation engines to decrypt the virus body.

This approach was not feasible, it was as well time consuming and costly. Every new polymorphic virus needs its own detection program and also, a mutation engine which produces seemingly random programs which can properly execute decryption and some mutation engines to generate billions of variations.

This approach can be misleading by identifying one polymorphic as another. These shortcomings led anti-virus researchers to develop generic decryption techniques that trick a polymorphic virus into decrypting and revealing itself.

To gain more knowledge about all forms of malwares with malware analytical skills subscribe to our CEH course at Soutech Ventures. We have trained and seasoned experts to give you both theoretical and hands-on ethical hacking knowledge and skills.

Face Detector Application to detect face from any images

A step by step Guide for IT Auditing: SOUTECH Web Security- Penetration Testing company in Nigeria