WhatsApp is bringing back a handy feature photographers have been missing 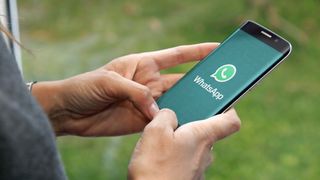 WhatsApp’s developers have been doing a lot of tinkering lately, with improvements to stickers and custom chat backgrounds in the pipeline, and now it looks like they’re preparing to bring back a small but useful feature that makes sharing photos easier when you’re in a hurry.

As WhatsApp users will know, when you’re composing a message in the app, there are two sharing icons to the right of the text box: one to open your phone’s camera app, and another for attaching gallery images, contact cards, audio files, documents, and sharing your location.

This second icon used to give you another shortcut to open your phone’s camera app, but earlier this year, WhatsApp’s parent company Facebook decided to replace that button with a link to the newly released Messenger Rooms (an app that allows you to hold informal video calls with up to 50 contacts).

It’s understandable that the developers dropped the extra camera icon, but taking it away was quite a controversial move. If you’re rushing to capture and share a moment, hitting the wrong button in your haste and having to spend time closing the share sheet could mean missing the opportunity.

Now, however, it looks like there’s been a change of heart behind the scenes. WABetaInfo, which specializes in tearing down new WhatsApp beta releases, has discovered a redesigned ‘share sheet’ in the iOS beta with the camera shortcut reinstated, plus a slightly cleaner, smarter look for all the icons.

It’s not yet clear when this feature will be rolled out to the release version of WhatsApp, but public beta tests of new app features are usually quite brief, so we wouldn’t be surprised if the secondary camera button makes a reappearance for all users in the coming weeks.

Setting Up Your Custom Keyboard Shortcut On Photoshop

A Handy Guide to Incident Response in 2017: SOUTECH cybersecurity tips and guide