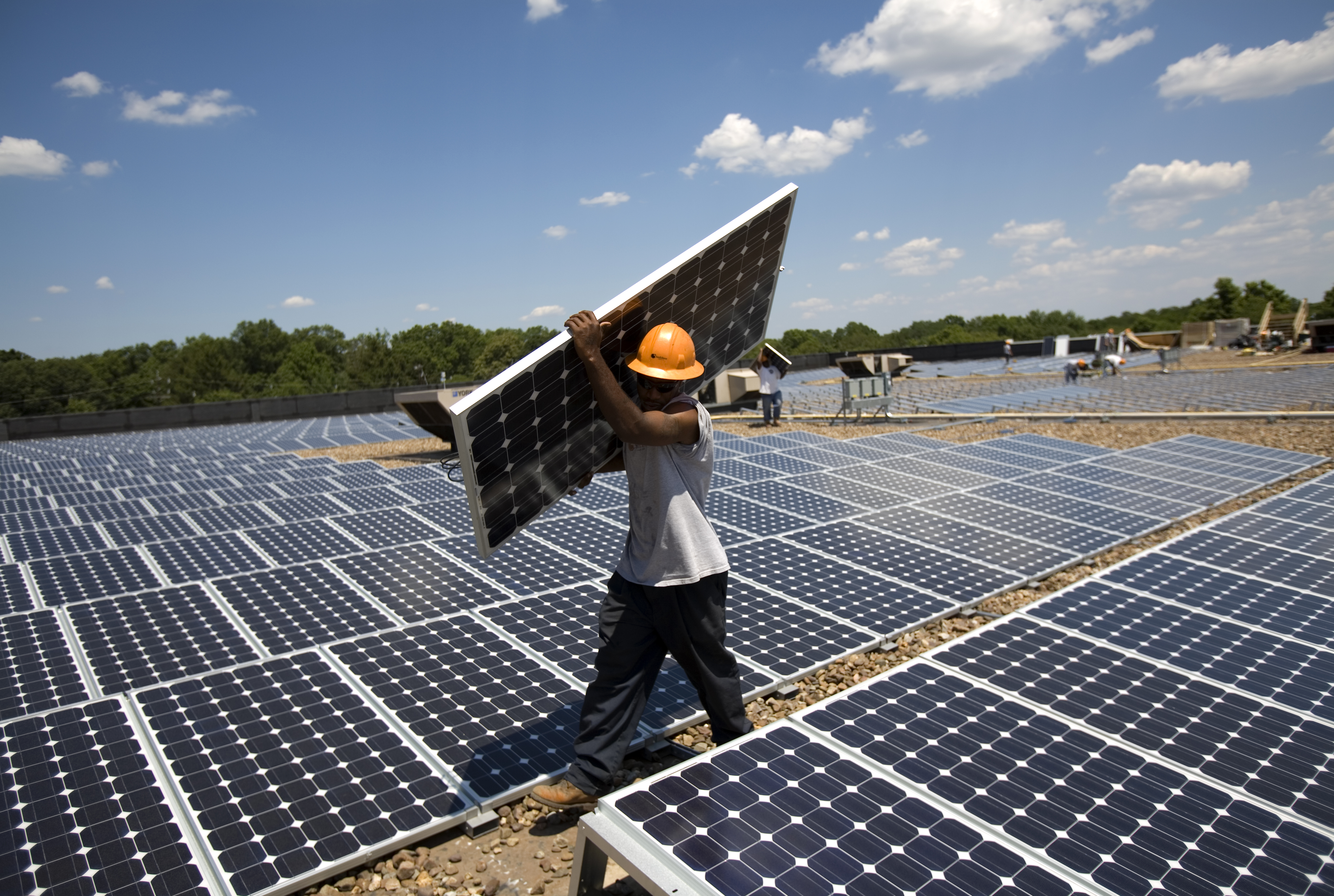 WHAT A SOLAR INVERTER IS:

BUT WHICH IS BETTER
GENERATOR: Generators are an AC power supply that uses fossil fuel (diesel or petrol) to run an engine. One of the major drawbacks of a generator is they can be inefficient and waste a lots of fuel if they are not run at the appropriate load. Generators also unnecessarily pollute the environment. If your generator is run below 75 percent of its rated capacity, this can cause carbon building on the critical engine components, shortening the life span of your generator’s engine. In addition, generators are noisy and expensive to run and maintain. 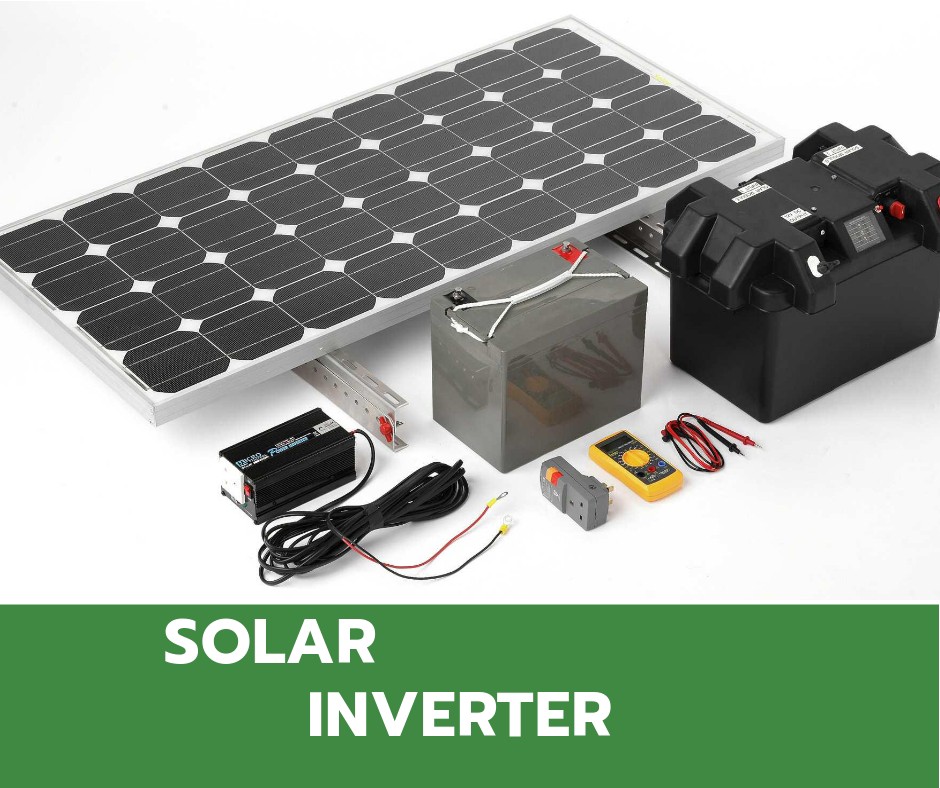 Solar inverter system are also AC power supplies but they use stored DC electrical energy in a battery or battery bank. They use electronics and transformers to modify the DC to AC and then boost the voltage to create 200v.Solar inverters are extremely efficient, even when compared to generators, and only consume DC power in direct relation to the amount AC power they put out.

COMPONENTS AND ITS CHARACTERISTICS:

SOLAR PANEL (Photovoltaic cells): PV cells are one way of generating electricity from solar energy.They are not the most efficient, but they are the most convenient to use on a small to medium scale. PV cells are mostly made from silicon (though a number of non silicon based methods are being developed. They are two types of panels, monocrystalline silicon and polycrystalline silicon which can be connected either in series or parallel .When connecting in series ,the voltage(V) is added to get higher voltage while connecting in parallel the current (A) is also added to achieve higher current.

BATTERY : As your electrical power usually needs to be available when the sun is not shining, it usually necessary to store electricity .They battery collect the DC power from the solar panels and stored. They are different types of batteries but the most prefer one that used in solar system are deep cycle battery. Batteries used in solar system, help to supply surge or high peak operating currents to electrical loads or appliances. It also functions as energy storage capacity and autonomy. It supplies power to electrical loads at stable voltages and currents by suppressing or smoothing out transients that may occur in the PV system.

Inverters are the hardest working component of a solar array. They are solely responsible for more operational functions than any other PV system component. These duties have continued to grow as systems get smarter and increase interaction with the utility grid. The basic function of an inverter is to convert the direct current (DC) power that solar panels create to alternating current (AC) power that is useful in homes and businesses or fed directly into the grid in front of the meter projects (utility scale solar arrays). Inverters are responsible for continuously tracking the solar array’s voltage to identify the
maximum power at which the modules can operate.

Lead Acid batteries will be damaged if overcharged, or their voltage pushed too high by continuing to charge with a high charge voltage.Therefore it will be necessary to connect a charge controller between the solar panels and the battery. When charging from the battery from a low state, it will effectively connect to the solar panels to the battery until a certain pre-set voltage is achieved. Most controllers however will use Pulse Width Modulation (PWM) to continue charging a battery to near its maximum, after a certain voltage has been reached. A further development of the charge controller is the Maximum Power Point Tracker (MPPT)charge controller which gives improved efficiency.

BASIC INSTALLATION GUIDE
ENERGY AUDIT: Before choosing the components, we have to calculate what is our load, how much time it will run and the budget of the client.

Solar panel(PV) that receive the sun’s rays and convert them into electricity called direct current (DC). DC is then converted into alternating current (AC) through a device called an Inverter. AC electricity flows through every outlet of your  home,powering the appliances.The power rating should be equal or more than the total load in watt at any instant. Apliances like fridge,hair drier,vacuum cleaner,washing machine etc likely to have their starting power consumption several times greater than their normal working power (typically this is caused by electric motors or capacitors in such appliances). This should be taken into account when choosing the right size of inverter.

SOLAR PANEL SELECTION: Solar panel converts the sunlight into electricity as direct current (DC). These are typically categorized as Mono crystalline and Poly crystalline.Mono crystalline are costlier and more efficient than poly crystalline panel. The rating of solar panel should be selected in such way that it will charge the battery fully during the one day time.

BATTERY SELECTION: The output from the solar panel is DC power. This power is generated during the day time only. So if you want to run a DC load during day time then it seem to be very easy.but doing this is not a good decision because most of the appliances need a constant rated voltage to run efficiently. Solar panel voltage is not constant,it varies according to the sun light.If you want to run the appliances during night then it is possible.The above problem is solved by using a battery to store the solar power during the day time and use it according to your choice.It will provide constant source of
stable,reliable power.

CONCLUSION: A solar inverter system is easily able to replace any power supplier,with the use of
sufficient solar panels.The long-term benefits of such an investment require no justification.

Want to take an online course because of your distance to Abuja, Owerri or Lagos?, Indicate in your SMS or enroll using this link>>>>

Solar and Inverter Installation: Difference between monocrytalline and polycrystalline

adree stelka
23:08 04 Dec 19
I will say, Soutech is the best IT training institute I have ever attended. You don't just learn IT, u also learn the business of IT. I started with web design, it was so good that I did a follow up with CEH. 3 months later, & I am still getting one-on-one support with my projects/business lol... I wish I could say more, I leave the rest to u 'skeptics' out there to discover. Thanks Soutech for adding this much value to me.read more

Temple matthew
09:05 23 Nov 19
My training with soutech was a memory I cherished, beautiful and conducive learning environment, well air-conditioned, bright and intelligent tutors, great staff and customer responds service. They have a simple learning illustrative tool that helped me a lot. There's is free WiFi in their facility, free coffee😁 and brunch for your delight. Thank you soutech for the opportunity to learn with you.read more

Precious Okonji
00:41 23 Nov 19
As Kindergarten as I was in web design, Soutech made a Pro out of me. Thank you Soutech for providing a serene environment that enhanced my learning. Okonji Precious.read more

Shedrach Odafe
18:36 22 Nov 19
My experience at SOUTECH was Awesome. It greatly impacted on my knowledge of web design and some other areas. For those who want to acquire IT skills, SOUTECH is highly recommended for you, They have good IT professionals and a very conducive learning environment.read more

Chilles VEVO
14:33 22 Nov 19
Soutech is the best place to learn software development and other ICT related skills in Nigeria and Ghana.They help their students grow in a lot of ways.read more

Seyi Samuel Abolarin
08:22 31 Aug 19
I had a fantastic moment at SOUTECH during my Solar and Inverter training. They have superb professionals who are excellent in impacting knowledge.read more

FRIDAY AMEH
21:41 30 Aug 19
The website design course I attended at Soutech was deep and very practical. Looking back now as a professional web developer, it was indeed the best choice.read more

Joy Etta
20:12 29 Aug 19
They take learning new skills to a whole new level. The class sizes are small, you may get a student teacher ratio of 1:1, the lectures are in depth with emphasis on actually learning what's going on & the environment is really conducive. Overall, I'd rate them a strong 5/5. Fantastic.read more

Ub averr
16:34 29 Aug 19
At Soutech, Web mastery and Digital skills deployment are made so easy. Mine is a testimony of one who has benefitted immensely and still reaping the fruits of that exposure at Soutech. A trial will clear your doubts.read more

King TNIke
15:01 29 Aug 19
Wow Soutech is truly the bomb 💣 i have been benefiting alot from there packages, it has turned my online business around, tested and trusted, Highly recommended.read more

Omotayo Ayodimeji
08:49 19 Aug 19
SOUTECH really helped me in achieving what I signed up for, I was able to discover how easy it is to create a website without me having any idea before. Really appreciate having the opportunity to learn from the professionals. Thanksread more

YAHAYA ABUBAKAR
08:28 20 Apr 19
Putting together a website is a task, finding the right individual or company is even more complex. I did my search around looking for this particular company that has the ability to create, design and optimized my web site. Thank God I meet with SOUTECH WEB DESIGN AGENCY, not only they have great taste in design but they can guide you through the process and beyond. My company Meeting with Soutech is the best decision ever. Thank you team soutech for your excellent and professional expertise.read more

Collins Emeka Orji
17:34 15 Apr 19
Soutech is technically beyond what is obtainable from a regular Nigerian I.T institute. They are practically the best and have a class of the art learning environment and very good/professional tutors. God bless you for your impact on me.read more
Next Reviews